The announcement of program

With the support of the OSCE Office in Yerevan “The Future is Yours” Organization is implementing “Youth against Corruption” project. Within the framework of the project anticorruption trainings, discussions, meetings will be organized for youngsters, as well as analysis of law will be implemented in the field of business and a package of proposals will be created.
During the project those participants who will demonstrate active participation will have opportunity to take part in the educational camps. The students of high schools and higher educational establishments can participate in the project. Works will be conducted in two groups (The first group-students of high schools, the second group- students of higher educational establishments).
Interested candidates are kindly requested to fill application for participation and send  it to abn0986@gmail.com   and  future@ftr.am.
Application  deadline  is   12.04.2015
If you require any additional information about “Youth against Corruption” project, please make a call to this number 099 391911.

“The Future is yours” charitable, social NGO announces a contest to participate in “Improvment of 'Heratsi' high school” program.

In the framework of the program furnishing of classrooms, laboratory rooms, library, hall and providing them with computers, as well as the grating surrounding of the windows of the school and installation of blinds are going to be performed.

If you require any additional information, please make a call to this number 010 20 57 31

Within the framework of the project “Youth against corruption” the participants took part in a winter camp held on December 3-7 in “Marriott” hotel, Tsaghkadzor.  During the camp trainings, discussions, different kinds of intellectual and entertaining games were organized for the participants. The invited experts summarized the results of contest (the articles written by participants and illustrated with photos) which was announced in July-August. During the final event that took place on December 6th the authors of the 1-4 best articles and photos were awarded, as well as the other 30 participants of the project received encouraging gifts for active participation.

Meeting with  Minister of Health of RA

On November 29 within the scope of the project “Youth to Youth” Armen Muradyan,  Minister of Health of RA, hosted a group of students from and N 5 high school of Masis city, Ararat region and from “Heratsy” high school.

After greeting the students the Minister noticed that continuous reforms have been carried out in healthcare system. He added, “I would like you to know that nowadays healthcare systems primarily foster healthy lifestyle. Everybody should be informed how a person can take care of one’s health and what are the prevailed risks”.
The students raised community issues connected with the healthcare system addressing their questions directly to the Minister. The list with the necessary medical equipment that “Masis” Medical Centre lacks was presented to him. Armen Muradyan suggested approaching the questions not from emotional basis: by the perspective of public healthcare management some expensive medical technologies included in the list were not preferable for “Masis” Medical Center to possess. Yet the fact that only one ambulance car was allocated for the whole city and its surrounding villages was of great concern.

Meeting at the National Assembly

The youth of the projects implemented by  “The Future is Yours”  NGO have had a meeting with Artak Davtsyan the head of Standing Committee on Science, Education, Culture, Youth and Sport. The participants covered the issues related to different spheres.

Meeting with Ambassador Andrey Sorokin, the Head of the OSCE Office in Yerevan 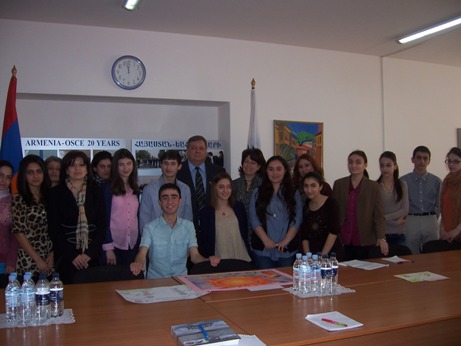 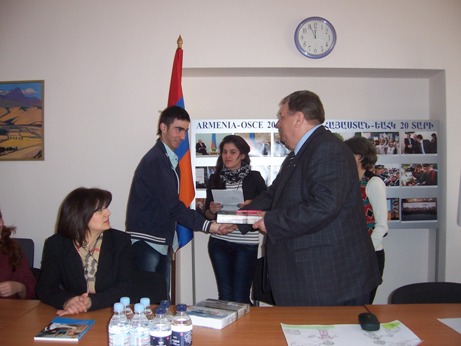 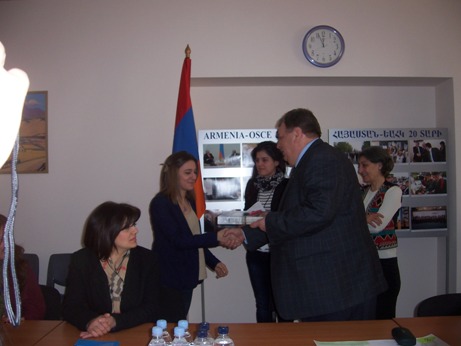 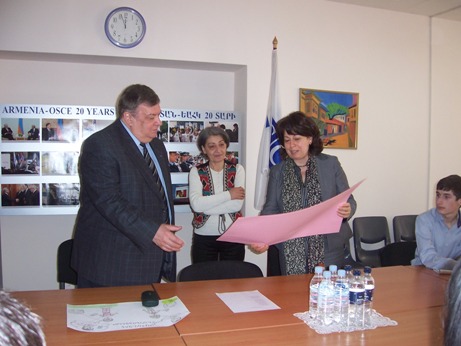 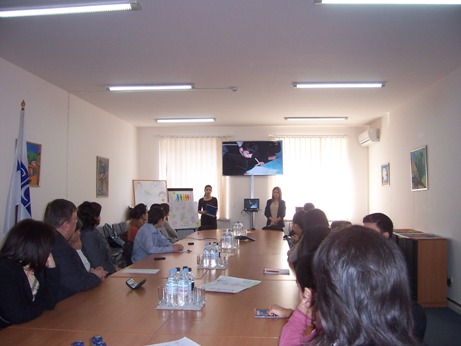 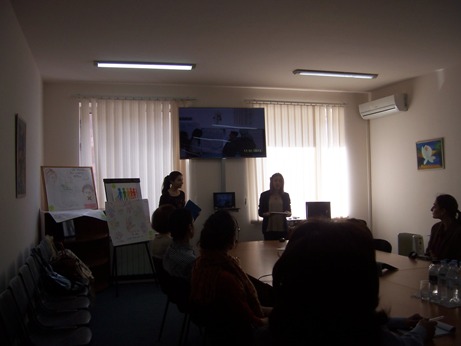 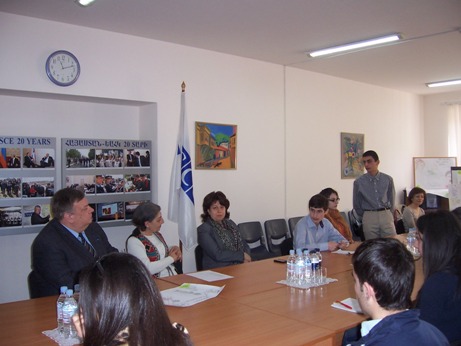 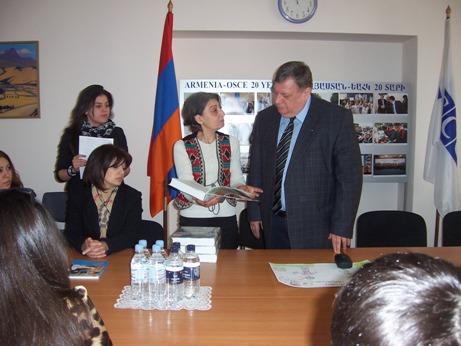 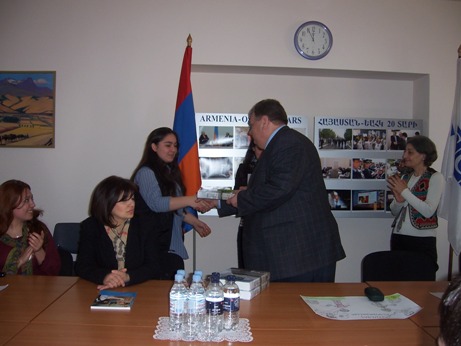 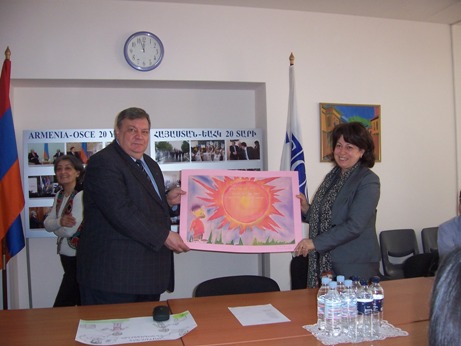 
“The Future Is Yours” NGO with the support of US Embassy Yerevan launched “Democracy Wheel” Armenia-Turkey project. As a result of application procedure 20 students were selected to take part in interactive trainings on democracy and dialogue.


30 active and initiative-taking youngsters from different Universities involved in "Youth against Corruption" project have worked with reforms in the spheres of education and police directed on corruption diminishing and prevention.
Within the framework of the project participants had meetings with RA Deputy Head of Police colonel of Police A.Osikyan, RA Passport and Visa Department Head, Colonel of Police N. Muradkhanyan, “Achilles” Drivers Rights Protection Center NGO President Eduard Hovhannisyan,
National Information Center for Academic Recognition and Mobility Executive Director G.Harutyunyan,
RA Ministry of Education and Science Higher Education Institution Control and Coordination Department Head S.Mikaelyan and leading specialist E.Aleksanyan. Implemented reforms and their impact on corruption were discussed during the meetings.

From October 11-16, 2011 participants of “Youth against Corruption” project visited Georgia to study the results of anticorruption reforms in police sphere and to witness transparency of working process. Participants visited Ministry of Justice of Georgia, Prosecutor's Office of Georgia, Parliament of Georgia, Ministry of Internal Affairs, Patrol Police Department, Police Academy, as well as Public Service Hall. As a result of the visit participants reviewed gained knowledge and impressions, which will be analyzed and presented as proposals to respective state agencies.

Meeting with RA Ministry of Economy

On October 25, 2011 “Democracy Wheel” project participants had meeting with RA Ministry of Economy first deputy Karine Minasyan and deputy minister Garegin Melkonyan. During the meeting prospective of Armenia and Turkey cooperation, investment policy, business environment improvement, Armenia and EU cooperation issues were presented, as well as participants had opportunity to address their questions to state officials.

Within the framework of “Democracy Wheel” project the visit of Armenian youth group to Istanbul, Turkey

Within the framework of “Democracy Wheel” project the visit of Armenian youth group to Istanbul, Turkey took place to have a dialogue with youth group from Turkey. During the dialogue and discussions organized on spheres of democracy, human rights, economy and culture youngsters of Armenian and Turkish groups had the opportunity to represent their opinions on current problems, discuss and clarify their views, find and offer ideas on Project sustainability.
Project participants had meetings at TOG – Community Volunteers Foundation, at Armenian Patriarchate with Holiness Ateschyan, “Hrant Dink” foundation, and at the Organization of the Black Sea Economic Cooperation with permanent representative of RA, Michael Vardanyan.

"The Future is yours"

The future is yours,
Create it today.
We are ready to support you…